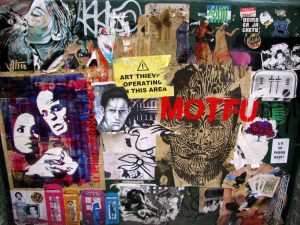 Challenges of Participatory Culture: Methodologies and Perspectives of Research

The concept of ‘participatory culture’ has been the subject of many discussions since its introduction in the works of Henry Jenkins and others, initially in the areas of new media studies and fan studies. As distinguished from ‘mass culture’ and ‘popular culture’, ‘participatory culture’ can be a useful theoretical frame for studying multiple forms of cultural products, practices, and norms of contemporary communication, sets of values and sources of creativity, beginning with fan cultures and participatory communities organized around different cultural tasks, and ending with charity and protest movements. Although primarily regarded as a phenomenon largely relying on new media as a tool, participatory culture can also take many different forms in urban space such as street art, flash mobs, musical events, festivals, etc. The idea of ‘participation’ laying at the core of the concept implies non-profit and non-professional (to a significant degree, even if not always entirely) communities and movements producing something beyond the existing cultural industries, while often relying on their products as sources, and sharing the results (knowledge, artefacts, texts, etc.) with each other and with anyone willing to join. Participatory culture is often described by researchers as a field of passionate creativity and collective defense of values that are not recognized and supported by the order of ordinary life in contemporary societies. Henry Jenkins, Mizuko Ito and Danah Boyd define it in their recent book Participatory Culture in a Networked Era (Polity Press, 2016) “in opposition to the dominant structures of institutionalized power”, while strongly connecting it to agency and creativity within communities and to other forms of meaningful participation.

This heuristically productive frame of ‘participatory culture’, or ‘cultures’, poses many challenges to contemporary researchers who work with that type of cultural communication within the fields and with the methods of new media studies, cultural studies, digital ethnography, cultural sociology, popular music studies, etc. The conference does not aim to address all of them. Rather, it is meant to bring together in Moscow prominent scholars from different countries and with different disciplinary backgrounds in order to demonstrate how some of the questions and issues of participatory culture as a research field have been addressed in their actual work. At the same time, young researches who are just entering the field will also be able to share their views and ideas on participatory culture at the conference.

The broad and fascinating set of cases to be presented at the conference is arranged into four blocks, each of them covering an important area of contemporary participatory culture studies.

Among the questions and issues that can be discussed at the conference, during the participants’ presentations or in discussions afterwards, there are methodological and ethical problems of doing research in fan communities; reception studies and audience studies and their relations to participatory cultures; history of participatory cultures, the issues of their archives and alternative temporalities; types of communities, their structures and relations to other cultural zones, institutions and powers, from cultural industries to outside audiences; political implications and status of participatory cultures in different contexts; virtual and real spaces of participatory performances; materiality and visibility/invisibility of cultural products and texts produced, transformed or re-purposed by participatory communities; translations of texts and transferences of norms and values across multiple borders in acts of transformative reception of any kind; and many others.

We welcome everyone at the conference in Moscow and invite the participants to share the results of their research into participatory culture and ideas on further development of the field.