The Participatory Condition in the Digital Age 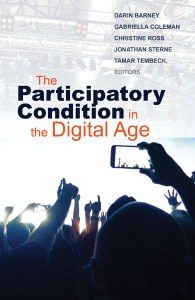 Just what is the “participatory condition”? It is the situation in which taking part in something with others has become both environmental and normative. The fact that we have always participated does not mean we have always lived under the participatory condition. What is distinctive about the present is the extent to which the everyday social, economic, cultural, and political activities that comprise simply being in the world have been thematized and organized around the priority of participation.

This book represents the most comprehensive and transdisciplinary endeavor to date to examine the nature, place, and value of participation in the digital age. Just as in 1979, when Jean-François Lyotard proposed that “the postmodern condition” was characterized by the questioning of historical grand narratives, The Participatory Condition in the Digital Age investigates how participation has become a central preoccupation of our time.

Part I: The Politics of Participation