Islam Chipsy and the Battle for Egypt’s Musical Identity 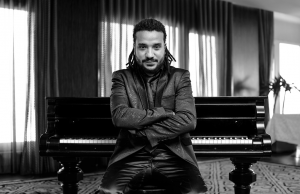 Islam Chipsy and the Battle for Egypt’s Musical Identity

Ahead of his gig at Cairo Jazz Club on the 16th of January, avant-garde Electro Shaabi music sensation Islam Chipsy sits down with Niveen Ghoneim for a candid conversation on his rise to fame – an ascent fraught with hardship and heartache – and its connotations.

Fourteen years ago, a 16-year-old busboy at a restaurant asked a posh-looking man in a fancy suit for the time, to which the man said, “I didn’t get that watch for you to pester me, did I? Now, get the hell out of here, go back to work!” Must have been a Rolex. Fast forward to 2016 and that boy has blossomed into the electrifying Electro Shaabi music sensation that is Islam Chipsy, driving Egypt’s stagnant music industry into unchartered territory; musical ingenuity.

Like Hip-Hop, Shaabi music (Arabic for ‘music of the people’) emerged from humble beginnings; street music stemming from the frustrations and struggles of everyday working-class people, it originated in Cairo in the second half of the 20th century. It has been dismissed by the social elites as mere noise, yet hailed by the ‘uncouth’ masses as their defining voice.

That’s not to say that Shaabi music – in its current state, at least – amounts to the same artistic value found in Hip-Hop today; after all, art is a purely subjective thing. Nor does it necessarily make one’s aversion to the genre a form of classism. To write it off, however, is to deny the nation’s underprivileged and downtrodden majority whatever semblance of freedom of musical expression they have.

Shaabi’s story has yet to be written, and whether the genre develops into a cultural movement denoting socio-political commentary remains to be seen. It hinges upon its performers’ ability to evolve musically.

Islam Chipsy is one reason to be optimistic; the fate of the genre rests in the 30-year-old’s limber fingers and Yamaha keyboard. He is taking the genre to new heights with his formidably illustrious sounds, which he masterfully produces by violently and virtuosically slamming the keys to spiral Egyptian Shaabi melodies. His phenomenal talent saw him tour Europe and produce music for some of the industry’s biggest names, like legendary Egyptian Shaabi singer Hakeem. As with all great people, his rise to fame was fraught with hardship and heartache.

We met in the affluent neighbourhood of Garden City, a far cry from his neck of the woods, at the iconic Cairo Capital Club to talk about his upcoming performance at Cairo Jazz Club. Little did I know that I was about to go where a select few have gone before, where he entrusted me with his Cinderella story.

Born Islam Saeed, Chipsy was raised in a working-class household in Imbaba. His father was a driver; “he had nothing to do with music, but his voice was very good and he sang very well,” the virtuoso said of him. His brother is famed El Dunia Zay El Morgei7a (Life is Like a Swing) Shaabi singer Amru Saeed, who – along with his other brother Muhammad – showed him the ropes. “I went to a lot of gigs with them, listening and learning. I was 12 when I landed my first job. It was a wedding,” he said reminiscently. “They paid me 50 LE,” he added, laughing.

Chipsy has had two pivotal moments in his life; the first was when he dropped out of school. “I wanted to make something out of myself, but a teacher had it in for me and, as a result, I hated school,” he explained. “My mother, God rest her soul, told me, ‘if you want to quit school, find another way to support yourself, and don’t ask me for a penny,’ so music to me was a way out.” Undeterred by his mother’s ultimatum, the young rebel paid his way by performing at weddings until, one day, he’d had enough of being cheated out of his money. “People would take advantage of me because I was young and alone,” he reckoned, so he took up a job as a busboy at a restaurant. “I used to work 18 hours a day cleaning dishes and I wasn’t ashamed of it,” he boasted. “It paid much less than what I used to make and I was fine with that.” One day, as he was cleaning dishes, he overheard a conversation the owner was having with his friends. “Do you see this busboy?” he asked, pointing at Islam. “He’s the best musician I know; look what I made of him!” he said jokingly. That was the second pivotal moment of his life. “I felt humiliated,” Chipsy said earnestly.

That day, he went home determined to make something out of himself; he quit his job and went back to playing music, but this time it was his maddening desire for transcendence that stroked – or more accurately struck – the keyboard. “I started playing differently, so I came to be known differently,” he said, but nothing could have prepared his friend’s wedding attendees for the sheer once-in-a-generation musical brilliance they were about to go down in history as the first to witness the first time he publicly debuted his new style of playing. “We were all hysterical and fooling around and dancing; it was unusual at the time but I plugged in my keyboard and played it hysterically because the atmosphere was crazy,” he reminisced. That was the first time he ever let people into that little-known part of himself, the part of oneself that, when tapped into, exudes genuine human ingenuity and emotional depth. “People were engaged with my music; they would take my number and I would play gig after gig,” Chipsy recounts. “I developed my technique until it has become what it is now.”

Music to Chipsy is a language with which he communicates and interacts with people, something he became aware of during his time in Europe. “My English is very bad, so I didn’t know how to communicate with the audience, but it felt like I could move them the way I wanted to through the music,” he explained.

Being the not-so-closeted Commie I am, I couldn’t stop myself from asking him about the socio-cultural class differences he feels now that he has gone from zero to hero – now that he is welcomed into high society with open arms by the likes of the fancy Rolex man from his adolescence. “I don’t see it that way. I view them as people who respect my music; and I’m aware of the whole class thing, but instead I try to earn respect by being great at making music,” he said with a good-natured smile.

I wanted to know if his earlier brushes with the upper crust have embittered him, but I had failed to see that transcendence trumps hate and that honest, working-class, salt-of-the-earth, good-natured people don’t hold grudges. Shaabi is the plebeian voice – their magnanimous gift to a world to which they bear no ill will – and Chipsy their musical emissary, extending the hand of friendship to an omnipotent minority that has, unbeknownst to them, long excluded and looked down upon the masses.

Islam Chipsy will be performing at Cairo Jazz Club on Saturday the 16th of January. For more information check out their Facebook page here or follow them on Instagram @cairojazzclub.