From revolutionary art to dystopian comics: Ganzeer on Snowden, censorship and global warming 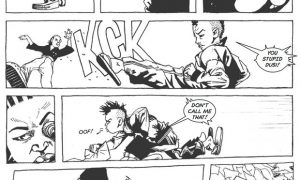 It is 949 years since a global flood of biblical proportions. The world is reliant upon a vast grid of solar panels to power its factories around the clock. Night-time has been consigned to legend. In the aftermath of environmental catastrophe, the world’s clean water is now confined to a network of towers built by the world’s richest man.

While the dystopian scenario of Ganzeer’s debut graphic novel, The Solar Grid, is science fiction, the story is rooted in history, political and personal. The Egyptian artist, best known for murals that championed the spirit of the 2011 Cairo revolution, took inspiration from his first sighting of the Nile’s Aswan dam. As child, he felt awe. Today, Ganzeer sees the environmental impact of the dam on Egypt as emblematic of humanity’s adverse impact across the whole planet.

“I was 16 when I went to the Aswan high dam,” recalls Ganzeer, now 34 and living in Los Angeles. “It was so breathtaking, being on top of this huge machine. But as I’ve grown older and become more concerned for the environment, it feels like if humanity ever had a warning sign in regards to the impeding doom of the earth, that Egypt is probably it. All this lush nature is referenced in the ancient texts, tombs and temples, scenes of hunting gazelles and lions – and you look at the country today and it’s really devastated.”

Egypt is currently suffering a serious water crisis, with the United Nations predicting the drop in supply will hit crisis point within a decade. “The dam has basically eliminated the natural seasonal flooding and drought that the country survived on for thousands of years,” Ganzeer says, whose name translates from Egyptian Arabic as ‘bicycle chain’, his analogy for the role designers and artists play in driving societal progress. “I found myself daydreaming about two kids from Cairo blowing it up. The story would be their journey to achieve that and how it would change the country for ever.”

From that idea evolved the main plot of The Solar Grid, which follows two boys, Kameen and Mehret, scraping a living amid the scrapheaps of Cairo under the glare of the artificial sunlight. “I felt I wanted to do something more universal,” he says of his decision to make the boys’ target the fictional solar array. “The concept of the Aswan dam is controlling a central natural resource. I figured if I was to apply it to the whole planet, that resource is obviously the sun. That’s what we see in the future with the two kids. As the sun sets, the solar grid automatically turns on and turns off as soon as the sun rises again.”

In a subplot set 475 years earlier, a whistleblower attempts to expose the corruption behind the industrialisation of the planet’s natural resources. A newspaper is sent a huge data leak about the true intentions of Al Gebri, the billionaire owner of the company behind the water towers, Skyquench. Teddy Taplin, the whistleblower, attempts to flee the US to China as the authorities detain a reporter at the Global Guardian and pressure him to reveal his source – not far from the real story of NSA whistleblower Edward Snowden and his relationship with the Guardian.

Ganzeer admires Snowden. “I think he is a hero. I can relate to someone who feels morally compelled to ‘do the right thing’ with complete disregard to the possible dangers that the self, or loved ones would be put in.” There are small deviations from reality. Snowden was already in Hong Kong when authorities began looking for him, whereas Ganzeer makes his whistleblower flee “quite close to when the leak happens”.

The storyline also draws on Ganzeer’s own flight from Egypt. In May 2014, he was denounced by a television broadcaster, Osama Kamal, on the programme Al-Raees Wel Nas (The President and the People). Displaying a familiar name of Ganzeer’s used by his friends, and his photo on screen, the presenter denounced him as a “recruit of the Muslim Brotherhood”, which had been declared a terrorist organisation five months earlier, and demanded that the government take action against him. Ganzeer fled Egypt for the US two days later.

The allegation, which Ganzeer denies, came after he published a cartoon satirising Abdel Fattah el-Sisi, who became president of Egypt the following month. This image, since removed from his website, showed what looked like Sisi in his army uniform but with a TV screen displaying a picture of a nervous rabbit instead of a face, with the caption: “Who’s afraid of art?” Underneath, the artist, whose most famous mural featured a cyclist facing down a tank, wrote that Sisi would turn Egypt into a police state.

“To some extent the character’s fleeing process in the first chapter, of going through the airport and not knowing whether or not he’s going to be caught or whether his identity is going to be revealed or not was something of a personal experience of mine,” he says. “I didn’t know if I was on an official list.”

In the last two years, similar accusations have been made against activists and journalists across Egypt, leading to multiple prosecutions and prison sentences. Although his departure to New York was planned, Ganzeer has not returned home since. “Things now are incredibly messed up with Sisi in power – people being stopped in airports and taken away without knowing whether they have done anything wrong or not, walking on the streets and being snatched,” he says. “I don’t think it would be wise to risk going back unless I’m willing to change my position and say I support Sisi and I think he’s the best.”

Future chapters of The Solar Grid see the story move to Mars, where much of Earth’s population resettle in the wake of the flood. Martian society is a direct democracy where there is no president or parliament. The population votes via a network connected to an artificial intelligence that offers advice on policies and laws. But they also have the option to actively consult the AI or even automate their vote to endorse what decision it thinks is best.

The artist says this does not reflect an anxiety over Egypt’s political future – but rather over our modern reliance on apps that crowdsource opinions, such as Yelp, which ranks reviews. “Chances are I’m not going to go to a restaurant that’s rated below three stars, so in a way I do rely on the technology telling me that the people voted that this is a five-star place” he says. “So to a large extent we’re already going there, I feel. This is like taking it further and putting it on steroids.”

Ganzeer treats The Solar Grid as a culmination of his personal, professional and political experiences over recent years, a record of who he once was – a graphic designer in Egypt – and who he became: using art to embolden pro-democracy protesters during and after the Cairo revolution, then exhibiting his work in galleries worldwide. “The minute you define yourself as an artist you limit your practice,” he says. “I don’t have a specific set of tools that I use, or a specific subject matter that I’m concerned with – other than that there are some really fucked up things about the world that I really don’t like and want to comment on.”