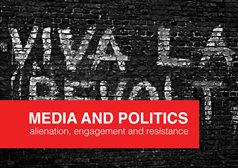 In recent times alienation, understood as a distance between citizens and their political and cultural environment, has resurfaced. Low levels of trust in ‘established’ political and media systems have led to increasing estrangement, characterised by the rise of populism, civic (dis)engagement and social unrest. Alongside this, alienation in the cultural realm has led to negative portrayals of and responses to the Other – e.g. minorities or refugees. Media have always been vital to facilitating political processes and identity formation, representation and resistance. We therefore seek to address questions of alienation, participation and subordination through the lens of media and communications. How are these phenomena occurring within, and beyond, representational practice? How are old and new forms of media differently implicated in such processes? How do they intersect with other social and political forces? How are they situated in different historical and cultural contexts?

This interdisciplinary symposium ties together the fields of politics, media and cultural studies and is particularly geared towards PhD students in the early stages of their research. The emphasis will be on thoughtful discussion with fellow PhD students, along with feedback from leading academics from LSE. This year’s keynote speech will be given by Bart Cammaerts (LSE).

Papers are welcomed in line with the following topics, but are not limited to these:

Please send a 300 word abstract, along with your name, e-mail address, academic affiliation (and department) and short bio to Media.Phd.Symposium@lse.ac.uk