The Conditions of Possibility: Democracy, Security, and Futurity in Post-Coup Cairo 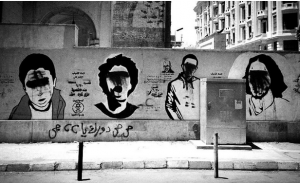 Please click here to watch a video recording of the event: https://youtu.be/CUpjTl0nwQ4

Ian Alan Paul is a transdisciplinary artist, theorist, and curator. His practice encompasses experimental documentary, critical fiction, and media art, aiming to produce novel conditions for the exploration of contemporary politics and aesthetics in global contexts. His projects often incorporate digital/new media, performance, and installation, and are informed by prolonged engagements with continental philosophy and critical/queer/feminist theory. Ian has taught, lectured, and exhibited internationally, and is currently part of the Media Studies faculty at Al-Quds Bard in the West Bank of Palestine.

Drawing upon fieldwork undertaken between 2013 and 2015, this talk will explore the myriad forms of contestation that emerged between the diverse legacies of the January 2011 uprising and the subsequent 2013 military coup in Cairo, Egypt. The presentation will feature sections of the online documentary The Conditions of Possibility (2016), reflections on the production of the documentary, and analysis of the competing forms of democratic possibility and suffocating security that continue to unfold in the present. The talk will be oriented by the question: How does the unfinished history of the January 2011 revolution continue to reshape how we imagine the “demos” as the subject of democracy?
Further Information

If you require any further information about this event, please contact Dalia Said Mostafa, Lecturer in Arabic and Comparative Literature at the Department of Arabic and Middle Eastern Studies, The University of Manchester (Dalia.S.Mostafa@manchester.ac.uk).