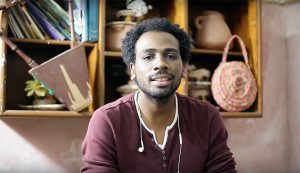 A young Egyptian entrepreneur has created a mobile app to promote use of the Nubian languages and offer a way for both Nubians and non-Nubians to learn about the region’s culture and heritage.

Software programmer Momen Talosh kick-started his app Nubi in February after realizing how many young Nubians do not know their heritage languages.

“I was once sitting with my young cousin and he was holding his tablet. I was trying to teach him some Nubian words. But he did not pay much attention to me. He was concentrating on things he was doing on his tablet,” Talosh told Al-Monitor. “At that moment, I decided to launch a mobile application that can teach Nubian to as many young people as possible,” he added.

The way to young Nubians was through their mobile devices, he concluded. According to a monthly report released by the Egyptian Ministry of Communications and Information Technology, the number of mobile phone subscribers in Egypt totaled 98.8 million in February 2017, compared to 94.6 million in the same month last year. Mobile penetration, meanwhile, hit 110% in February 2017, compared to 107.7% in the same month the year before, according to the ministry.

Talosh further developed his idea of an app to teach Nubian after he participated in training sessions organized by Startup Weekend Alexandria. The accelerated course provided him with support choosing his team, launching his app and creating marketing campaigns on social media.

“After attending this training, I started to gather data … and possible learning tools. Then I developed the application, which contains pronunciation, Nubian songs, Nubian proverbs and [links to] books written by Nubian writers,” he said. The app offers two different streams of lessons in Kenzi and Fadicca, which Talosh calls dialects of Nubian, but linguists and other researchers consider separate languages. It has been downloaded 8,000 times so far by users from Egypt, Sudan, the United States and Saudi Arabia.

Kenzi and Fadicca are two of the five extant Nubian languages, and their speakers are in steady decline. Three years ago, a petition addressed to UNESCO Director-General Irina Bokova asked for help to save the Nubian “language” spoken by millions in southern Egypt, northern Sudan, Darfur, the Nubak Mountains and in the Nubian diaspora. Written records of Old Nubian, the ancestor of the five surviving modern variants, date to the eighth century. One of the oldest recorded languages of Africa, Old Nubian was written not in Arabic script but in one derived from ancient Greek.

“The Nubi application is very useful to Nubians who are living away from Nubia and Aswan and working in the cities,” 27-year-old user Mahmoud Tag told Al-Monitor. Tag, a Nubian who lives in Alexandria, added, “Many of these people want to learn the language but do not have a place or an outlet. The application is the perfect platform.” He added that non-Nubians who are interested in Nubia can also use it to get acquainted with Nubian culture and traditions.

After the building of the Aswan High Dam in 1960s and the flooding of a majority of Nubia, the displacement of Nubians and the destruction of their traditional villages have contributed to a serious decline in the use of their languages. Nubians, who are predominantly Muslim but not Arab, have started in recent years to use the Arabic language in their everyday lives. The change has led younger generations to stop learning their heritage languages, which are not taught at schools nor used in public institutions at all.

For Talosh, language and culture is only the first phase. He plans to extend the app by introducing commercial and touristic dimensions. The additions will display handmade Nubian products, so that people can order them online from manufacturers in Nubia. “The application will also provide a list of hotels, restaurants, museums and tourist sites in Nubia with an eye toward boosting the region’s tourism,” he said.

Talosh said that his app’s slogan is “We Will Bring Nubia to Your Doors.”

“The application will allow Nubians and non-Nubians to buy Nubian products online, book hotels and restaurants online,” he said.

“Nubia has a culture of its own. We are trying to keep this culture alive. You cannot find anything like it in any other place of the world. And we Nubians have to preserve that culture and heritage and spread them,” said Talosh.