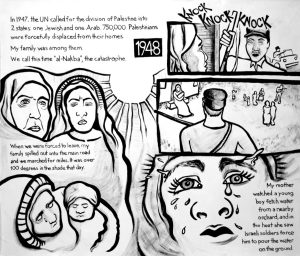 “Najawa: A Story of Palestine” is a 45-foot “street comic”, composed of eight large panels, which tells the story of a Palestinian woman’s life over the course of eight decades, beginning with the Nakba of 1948.  It was created by Vermont artist Michelle Sayles, in collaboration with artist and educator Jen Berger, and Vermonters for a Just Peace in Palestine/Israel.

This comic synthesizes oral history, documentary, and media accounts of life in occupied Palestine. Its first showing was in September, 2015, at the South End Art Hop in Burlington, Vermont.  This major arts festival that draws up to 30,000 people annually. It was later exhibited for several weeks at the Fletcher Free Public Library in Burlington, where it was warmly and enthusiastically received.

In addition to the video, you can view the individual panels of “Najawa” online at Red Wedge Magazine.