A Theory of Nonviolent Action 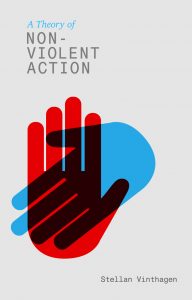 A Theory of Nonviolent Action:
How Civil Resistance Works

In this ground-breaking and much-needed book, Stellan Vinthagen provides the first major systematic attempt to develop a theory of nonviolent action since Gene Sharp’s seminal The Politics of Nonviolent Action in 1973.

Employing a rich collection of historical and contemporary social movements from various parts of the world as examples—from the civil rights movement in America to anti-Apartheid protestors in South Africa to Gandhi and his followers in India—and addressing core theoretical issues concerning nonviolent action in an innovative, penetrating way, Vinthagen argues for a repertoire of nonviolence that combines resistance and construction. Contrary to earlier research, this repertoire—consisting of dialogue facilitation, normative regulation, power breaking and utopian enactment—is shown to be both multidimensional and contradictory, creating difficult contradictions within nonviolence, while simultaneously providing its creative and transformative force.

An important contribution to the field, A Theory of Nonviolent Action is essential for anyone involved with nonviolent action who wants to think about what they are doing.

Johan Galtung, founder, Transcend International
“This superb study of nonviolent action will become the key book in the field for this generation.”

Mattias Gardell, Uppsala University
“An essential book for every researcher, activist and human rights defender interested in the sociology of resistance and the opportunities and limitations of nonviolence as a method for human emancipation.”

Stefan Jonsson, Linköping University
“Combines the sociologist’s rigor and the historian’s overview with the activist’s practical experience, resulting in a convincing synthesis—the first of its kind, and a fundamental book in its field.”

Brian Martin, University of Wollongong
“A pioneering contribution to the field. Using revealing examples of actions and campaigns, Vinthagen’s sophisticated and illuminating theoretical picture is tightly linked to practice. Activists and scholars alike have much to gain from this tour de force.”

Roland Bleiker, University of Queensland
“Building on traditions that see nonviolence as a strategy, a tactic or a way of life, Stellan Vintagen offers a new sociological theory of nonviolent action. Scholars and activists will gain both insight and inspiration from this book.”

Annika Björkdahl, Lund University
“In this valuable and important contribution to the field Vinthagen advances a sociological perspective on non-violence to analyse the social practice of nonviolent actions. The unique combination of theory and practice will attract the attention of both scholars and activists.”

Anna Leander, Centre for the Resolution of International Conflicts, Copenhagen University
“This book is a profoundly relevant academic book. It is a rigorous, thoughtful and creative exploration of non-violent politics . . . unlike most academic work, it speaks to anyone interested in non-violent political action in contemporary society.”