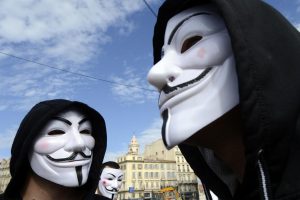 Site hopes to take on Facebook by making its algorithms more open, as well as making it impossible to share data

A new social network, backed by members of Anonymous, hopes to take on Facebook and the other social media giants with a commitment to privacy, security and transparency about how posts are promoted.

The site, Minds.com, has the same basic options as any other social network: users send updates to their followers, who can comment or promote posts that they read. But unlike its competitors it doesn’t aim to make money from gathering data — instead, it encrypts all messages, so that they can’t be read by advertisers or by governments.

The app’s other big differentiating feature from other networks is that it rewards people for interacting with posts, by voting, commenting or uploading. Users are given points that can then be exchanged for views, meaning that the posts of active members will be more promoted by the network.

The site describes that mechanism as a “network that rewards you with reach”. As such, it is more straightforward than the Facebook algorithm — which the company little discusses and seems to work on a complicated mix of engagement, clicks and now the time spent looking at certain posts.

The site has been officially launched with desktop and mobile apps. But the group behind the project has made it entirely open source, so that anyone can contribute to the design and upkeep of the network.

An Anonymous-affiliated page with over a million followers, ‘ART of Revolution’, put out a call to support the site. “Let us collaborate to help build minds.com and other open-source, encrypted networks to co-create a top site of the people, by the people and for the people”, the message read.