Call for Participants | Social Movements after the Global Crash: Looking Back, Looking Forward 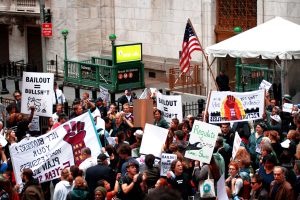 Social Movements after the Global Crash: Looking Back, Looking
Forward

The Editors of Social Movement Studies invite interested scholars and activists to submit expressions of interest to participate in our first ever conference, which will be held on June 27-29 at Loughborough University London.

Context and Rationale
Following the global financial crash of 2007/2008, states throughout the world have witnessed a wave of collective mobilizations seeking to challenge processes of political and economic disenfranchisement. In authoritarian, semiauthoritarian, and liberal democratic regimes, social movements have variously sought to name and transform dominant practices of democratic enclosure. They have developed new and arresting forms of mass mobilization in transnational waves of protest and national campaigns, from Occupy to anti-austerity movements, student movements, Black Lives Matter, #YoSoy132, Gezi Park and numerous others; they have advocated, developed, and experimented with new forms of democratic participation in micro-level neighbourhood organising and the establishment of alternative economic circuits. In the face of these many mobilizations, institutionalized politics and policies have also undergone a transformation, raising new challenges for social movements. Whistleblowing and leaktivism (e.g.WikiLeaks and the Panama papers) have evidenced the emergence of new techno-political debates and strategies, but have been met with mixed results: increasing criminalization and decreased protection form whistle blowers and stronger legal protections for state surveillance in some contexts, while advancing data privacy rights in others. Movements have also fuelled the rise of hybrid movement parties and innovations in citizen participation, raising new questions about the possibilities and challenges of closer movement and political institutional relations. As mobilizations for greater democracy and rights have increased so have counter-moves to challenge these demands, from movements who mobilize against rights and equality, to greater authoritarianism and curtailment of rights by states. Even in democratic contexts, movements today face a unique set of challenges, not least in having to make the case for previously taken for granted ideals such as democracy and equality.

Throughout this period, Social Movement Studies has published a wealth of articles and special issues (see e.g. Occupy! 2012 https://www.tandfonline.com/toc/csms20/11/3-4, and Resisting Austerity 2017 https://www.tandfonline.com/toc/csms20/16/1) attempting to make sense of this remarkable historical period for collective action and democratic transformation. If you do not have access to a subscribing library and wish to read contributions to Resisting Austerity, you can login or register with a personal account to get free access to the past two years of Social Movement Studies content by using the following link: https://goo.gl/PuiTgt. The conference webpage includes a linked list of SMS publications likely to be of interest to conference delegates and will soon be available here: http://bit.ly/csms-2019-conference

The journal editors invite participants to engage with any of four thematic blocks which will attempt to address a series of questions that arise in this historical moment of reflection and renewal. The four themes are:

1) Lessons learned: What have we, as scholars and activists, learned theoretically, methodologically, empirically, or strategically from this period of mobilization? Have the events of recent years caused us to modify existing theoretical frameworks or paradigms or develop new methodological approaches to the study of social movements? Are there significant empirical shifts in what we are witnessing? Have changes in global and national governance, capital formation, media, technological capacity, public opinion, and identity formation produced new relationships between activism, society, and the state, and new material strategies of struggle, resistance, and democratic enactment? Have new empirical and theoretical developments generated new scholarly and activist debates? In short, what if anything has changed and what have we learned?

2) Intended and unintended outcomes: What are the most significant consequences and outcomes of this global wave of protests? How has collective mobilization shaped and responded to these outcomes; and how have collective actions and collective actors themselves been transformed (and transformed themselves) by these consequences? In Europe, for example, we’ve witnessed the dismantling of the welfare state as a result of post-crisis austerity politics, an increase in legal repression, the rise of the right in some countries and the emergence of hybrid parties and municipal movements that integrate elements of the movements in the squares and try to innovate institutional politics from within. In Taiwan, we’ve seen the emergence of a powerful hacker community that has influenced national politics and generated new forms of citizen engagement and government oversight. What are the most significant outcomes we can point to and do they provoke us to change our theoretical models?

3) Techno politics and techno resistance: In the post crisis/post global wave scenario we are seeing the global extension of digitally enabled democratic imaginaries as well as rapid developments in media and digital media practices and scholarship. Participants in this thematic block are invited to propose and engage with key questions around these developments, including such themes as collective identity formation, leaktivism, whistleblowing, data justice, hacker ethics, digitally enabled activist practices, new forms and new uses of media in social movement related politics and communication.

4) Activist strategies: How are activist communities addressing the intended and unintended outcomes of the last decade of protest? What are the new lines of debate within activist communities? How are activists confronting and strategizing in the face of such issues as the dismantling of the welfare state, the rise of the  Right, the curtailment of legal freedoms, the rise of new hybrid parties etc.? What new challenges have arisen for social movements and how are they addressing them?

Do you have experience with facilitation and moderation? If yes, would you be willing to help with moderation and facilitation during the conference? If so, please indicate this in your email as well.

Deadline for participation proposals is October 30, 2018. We intend to respond with decisions in early December.

Selection Process
Participants will be selected on the basis of relevance, fit with other proposals to ensure meaningful discussion, and experience in the area by a group of editors. We encourage scholars of all career stages, including early career researchers and doctoral students to apply. Once we receive all the proposals we will organize participants into sessions organized around one of the four thematic blocks. Selected participants will be asked to prepare notes and a very short presentation to kickstart each of the sessions, in which other attendees to the conference can also participate once the core discussion is fully underway.

We would like some help:
We are looking for someone with the skill set (IT and Methods) to help us with the closing plenary session in which we will try to map out the main takeaways from the conference in real time in a way that is visible to all and can produce some infographics to share. If you have this skill set and would like to participate in this capacity, please get in touch by writing to SMSCONF2019@gmail.com with subject line “Closing plenary SMS Conference 2019”.

Important Information
Conference Events /Fee
The conference will include a welcome reception, meet the editors, and film screening, and two lunches and two coffees. There is no fee for participation, but because space is limited we do ask that if you are accepted that you commit to participating in the conference event and notify us immediately if you are not able to attend.

Support for Early Career Researchers: We have a very limited amount of travel bursary funding for early career/precarious researchers. Once you have been accepted to the conference, if you’re interested in applying for this support please email SMSCONF2019@gmail.com with subject line “Travel support /Early Career Researchers /Social Movement Conference 2019”, indicating your circumstances and why you’re applying for the funding.

We cannot cover travel costs for any other participants.

Accommodation
Accommodation is not provided but we can recommend booking early for an economical pre-paid rate the following options: The prepaid hotel rates are £72 per night for the Moxy Hotel and £84.50 for the Premier Inn. This does not include Breakfast. Rates which are more flexible and include Breakfast will be over £100 per night.