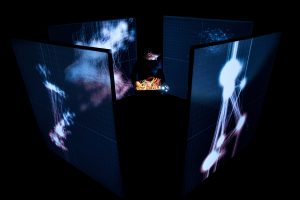 The International Journal of Performance Arts and Digital Media is seeking contributions by 28th February 2019 for a special issue on ‘Reterritorializing Digital Performance From South to North’.

Digitally mediated bodies have become key sites of performance in the contemporary world, providing individuals space for working outside politicized media and corporatized theaters. In what ways do digital embodiments relate to territorial politics? While there prevails a utopia notion that digitalization of culture brings a flattening of hierarchies, digital media are often entangled in corporate and governmental politics. They work in unequal ways based on geopolitics, economics, and social structures. This special issue of IJPADM examines modalities of digital and post-digital performance that cross between online platforms and territories of embodiment. Putting in dialogue case studies from the South and North of the global economy, we ask how digital performance places and dis-places identity politics.

In both South and North, creative digital performances open up the politics of normative space, and attempt to refigure the territories from which they launch. Digital performance from Asia, Africa, and Latin America often emerges from political unfreedom, intersects with activist efforts, and counters corporate production practices. Actors here assemble virtual territories within geographical space in order to perform posthuman agency (Barad 2003). They move between online and offline domains to territorialize critical embodiments and make political claims matter. In the Global North, media channels are perceived as more open, but are only democratic to the extent allowed by players controlling information platforms and pipelines. Gatekeepers such as Google and Facebook tip the scales of power by offering a pseudo-freedom, while minutely controlling the information they surveil, collect, and disseminate. Performing bodies in digital assemblages are outcomes of these societies of control, where algorithms generated via digital tracking fix territories and figure a limited range of human identities.

How can performance studies lenses help to explicate the performativity of genres enabled by digital technology? What practices do digital performances contribute to cultural repertoires of embodiment? A key question informing our dialogue between digital performance in the Global South and North is how to think of the differences between communication networks entangled with separate (though intertwined) politico- economic structures. How are respective social and economic relationships reassembled when culture becomes pervasively mediatized (Couldry and Hepp 2017)? We propose to reframe the concepts of North and South in terms of territorialization rather than territory, attending to the material relations of digital networks with geographically situated powers. We also examine how particular configurations of human and nonhuman actors (as in social media algorithms) shape the intervention of digital performance in political territories. Following conceptual frameworks of agential realism, new materialism, and critical posthumanism, we introduce politics of territorial difference into the analysis of distributed materiality in digital performance.

This special issue, guest edited by Sonali Pahwa and William W. Lewis, considers how the materiality of digital networks affects the agency of performance in varied territorial (political, economic, cultural) domains. We ask: How does digital performance change the territories upon which and through which it acts? How do these territories ground the performance of agency in digital networks? Does digital creation and digital labor destabilize human agency in favor of technological agency? We invite contributions that examine the way territorial relations affect digitally informed performance; how digital performance reconfigures conceptions of labor and activism; how the digital reassembles human-nonhuman relations as it links embodiments across platforms; how digital circulation changes the affective or economic impact of performance; and how digitality can stage community between and within territories. Our volume seeks to contribute case studies of digital (or digitally-informed) performance complementin pioneering theatre and performance studies scholarship at the intersection of new materialism, communication studies, and post humanism.

Please submit your contribution, formatted according to the Routledge journal style, through the journal¹s website
<https://www.tandfonline.com/action/authorSubmission?journalCode=rpdm20&pag
e=instructions>.